A messy Monday for the UK-listed oil/gas/LNG concern BG Group.  Whenever you see 'force majeure' in the headline of a corporate statement it is likely that the share is heading down.  That is certainly the case with BG Group shares today which have fallen to almost a one year low.

'We have elected to issue Force Majeure notices in Egypt reflecting the ongoing diversions of gas volumes to the domestic market. Year on year decline in Egypt and the US are the drivers of volume decline from 2013 to 2014, with the rest of the base portfolio broadly flat overall. The contribution from our key growth projects in Brazil and Australia, which remain on budget and schedule, is increasing, but the growing asset base and higher royalties, combined with the decline in production, are leading to higher unit operating costs in 2014'

The Egyptian situation clearly has been politically very messy for a while and is bad enough for the shares.  Am I that surprised there were some pooled delivery issues on the LNG side due to 'domestic diversions'?  In hindsight, probably not.  Will there be a settlement in due course?  Yes: as I remember the management of another oil/gas company who are exposed to Egypt telling me, without the international companies, the country would have to start importing oil/gas...and that will bring them even closer to a clear economic crisis.

The magnitude though of this and lower gas prices in the US is surprisingly material though at US$2.2bn or c. 3.6% of market cap or - to put it another way - c. 50% of FY13 'business performance earnings'.

So put it all together and it is a gap year for production growth.  When BG add 2014 onto the below charts it will not look so great. 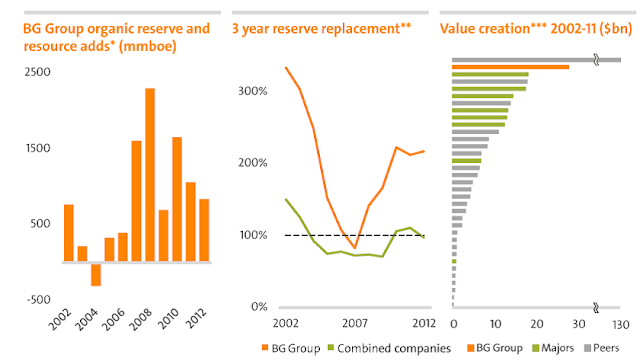 All the medium-term value remains though, especially with the growth of the Brazilian and Australian assets and a return to c. 7% production growth in 2015.  The full set of 2013 numbers will be out in early February, but everyone will be looking at the 2014-15 commentary.  That's the big opportunity for the still fairly new CEO and his management team to lay out to the financial world the future story.  On this basis I bought some shares today - near the 52 week low was too good an opportunity.

Looking at it another way, that's the second big warning in two weeks from large oil and gas stocks (the other being Royal Dutch Shell).  More sector peers - including Exxon Mobil - are talking to the market in the next week.  The oil/gas sector is a large part of indices and popular with investors but it has had a troubled start to 2014.  More insights into this potential trend as the week goes on.

Email ThisBlogThis!Share to TwitterShare to FacebookShare to Pinterest
Labels: energy