Earlier in the month, Samsung pushed out a short summary of their Q4 results which raised as many questions as it did provide answers (see link here).  I concluded back then that:

'Currently Samsung is valued at around x5.3 EV/ebit.  This does seem light...but it is a fast-moving situation and competition from China is just going to intensify.  I have not been tempted yet by Samsung shares but I have put a flag at the Won1250k level'

Well, we have not hit that level in the last few weeks but I did note that despite headlines like 'Samsung Profit Drops as New IPhones Win Sales, Won Gains' the publication of the full set of Q4/FY numbers by the company was met by...a small share price rise.

So what did more detail tell us?  Well beyond the aforementioned sequential quarterly profit decline and impact of competition/the Won, the key Q4 numbers chart was this one:

So...on a quarter-on-quarter view, consumer electronics (CE) saw rising profitability but the IM and Device Solutions (DS) divisions saw falling profitability.  All of this was the complete opposite of the 2013 year-on-year trend...that's change for you.

As for IM...tablets again good due to new releases...but smartphones suffering from tough comparisons and 'inventory adjustments'.  Sounds like lots of competing products out there.

It is a fast-moving world but note the common (net positive) theme above...tablets.

And what about the future?  Chip demand remains solid especially in the aforementioned tablet and low-end smartphone market.  That's good.  Elsewhere though...

'Tablet: expect launch of various new products and intensified price competition'.  So much for a continuation of that theme then...such are the fast-moving technology markets. 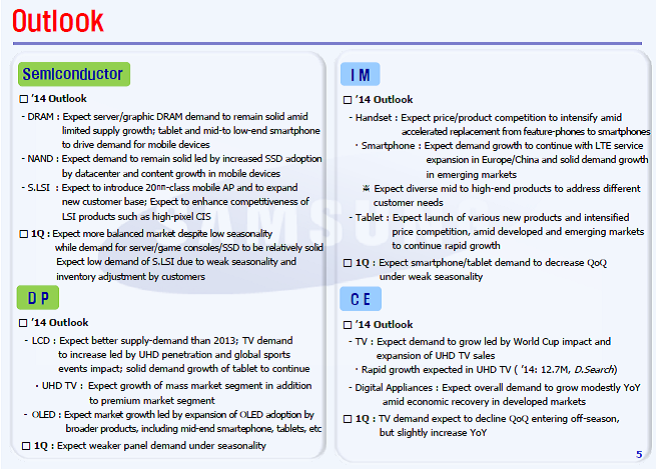 Judging by this Bloomberg report the pace of new products cuts across more than just tablets...

'Samsung, which sells about one of every three smartphones worldwide, plans to release the Galaxy S5 by April, pairing it with the successor to its Gear smartwatch, Lee Young Hee, executive vice president of the mobile business, said in a Jan. 6 interview. The company is counting on new features to spark sales after its predecessor, the S4, fell short of analyst expectations amid competition from Chinese makers bringing out smartphones costing as little as $100. Samsung will announce at least one other wearable device this year, Lee said without elaborating, as the company also releases new tablet computers to take on Apple’s iPad.'

It is a fast-moving world and Samsung's two-thirds profitability split towards the IM division is the big risk.  Still, cash continues to roll-up (now Won40trn or 23% of market cap).  So what to do? As with Apple doing something with a super strong balance sheet to help further support shareholders may bizarrely lead to a higher share price valuation.

As noted above the static valuation is low and I am, on a one day view, heartened by the reaction of the shares.  A stronger technical area is at the Won1250k level.  Samsung shares are worth keeping an eye on...for their general insights and possible money-making opportunity.